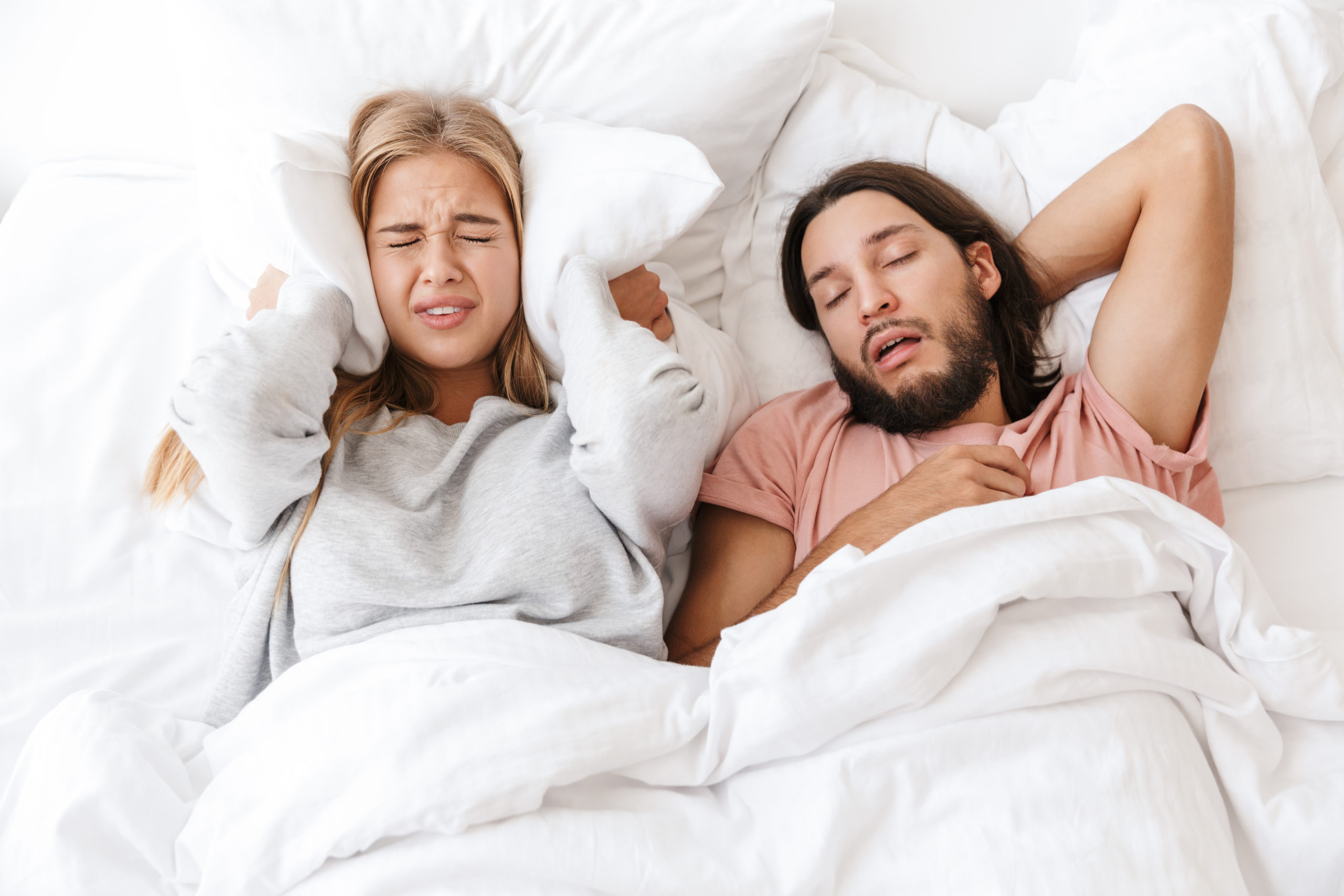 Sleep apnea is a serious problem that is often overlooked. Thus, there are known sleep apnea symptoms that you must need to know.

It’s a disorder that interrupts your sleep with symptoms ranging from mild to severe. In severe cases, it can lead to things like high blood pressure and long-lasting fatigue.

While men are more likely to be diagnosed with sleep apnea than women, symptoms are not gender-specific. Read on to learn about the varied sleep apnea symptoms.

Sleep apnea symptoms in women can be difficult to detect, but they can be serious if left untreated. Common symptoms of sleep apnea in women include:

Other than snoring and breathing disturbances, women may experience restless leg syndrome, chest pains, and cardiac arrhythmias during sleep. This can lead to hypertension, heart problems, and obesity when left untreated.

Additionally, women are more likely to develop complications as a result of sleep apnea, such as pneumonia, depression, and anxiety. Therefore, it’s important to be aware of the symptoms and be able to identify them to seek treatment.

Early detection and intervention of sleep apnea can help women take preventive steps to avoid the serious consequences of this condition.

Sleep apnea is a serious medical condition that can affect men more than women. Symptoms of sleep apnea in men include:

Other signs may include symptoms such as gasping or choking during sleep, frequent waking up to urinate during the night, and chest pain. Men may also experience anxiety or depression due to lack of sleep and often feel irritable or hopeless.

If you are experiencing any of these symptoms, please seek medical attention as sleep apnea can be a serious medical issue if not treated properly and can lead to other health issues and decreased quality of life.

Is There Really a Difference Between Sleep Apnea in Men and Women?

There is a difference between sleep apnea in men and women. While there may be some similarities, the diagnosis, treatment, and research concerning the condition differ greatly between genders.

Generally, sleep apnea appears to be more prevalent in men than in women and it is usually more severe. Men, who are particularly at risk for sleep apnea, tend to be middle-aged and overweight. Women, on the other hand, are more likely to be considered of ‘normal’ size, yet still suffer from the condition.

There is also evidence that men and women respond differently to treatments for this condition. For instance, lifestyle modifications such as weight loss and smoking cessation are more effective in women. These may not be more effective when compared to men.

What Are the Different OSA Causes

Sleep apnea can be caused by a variety of factors, but the most common cause is linked to a person’s:

Being overweight or obese can cause a blockage of the upper airways, leading to temporarily blocked breathing during sleep. Aging also tends to weaken the muscles of the throat, which can worsen any existing sleep apnea central disorders.

Genetics can also be to blame, as certain facial structures that lead to restricted air passage can be inherited. Nasal and sinus conditions, such as a deviated septum, can contribute to sleep apnea.

Alcohol or medication use can cause muscles to relax too much and interfere with normal breathing patterns. Additionally, smoking can cause swelling in the airway that further restricts airflow.

Can Sleep Apnea Be a Health Risk and Kill You?

Sleep apnea is a common medical disorder that can be deadly if left untreated. Sleep apnea is characterized by the interruption of your breathing during the night. This sometimes happens to the point where you stop breathing altogether. If this occurs multiple times throughout the night, it can cause major health problems, such as an increased risk of heart attack and stroke.

In some cases, sleep apnea can even lead to death. Research has found that individuals with obstructive sleep apnea (OSA) have a three to four-times greater risk of death than those without it. Additionally, those with sleep apnea are significantly more likely to experience a heart attack or presentation of heart disease.

Therefore, proper diagnosis and treatment of sleep apnea are key to preventing potentially life-threatening health hazards. If you have any of the symptoms of sleep apnea, it is important to seek medical advice and get a diagnosis. With effective treatment, you can reduce your risk of serious health consequences.

Is Sleep Apnea Dangerous to Every Patient With OSA?

Sleep apnea is a serious condition that can put the health of an individual at risk. It is characterized by pauses in breathing while sleeping and can be accompanied by snoring and loud noises. Sleep apnea is dangerous because it can cause temporary oxygen deprivation to the brain and other vital organs. This leads to:

It also has psychological effects, such as depression and anxiety, and can also affect memory, concentration, and other functions. If left untreated, it can lead to death. Treatments for sleep apnea include:

The machine provides air pressure to the person’s airways to help them breathe during sleep. Although sleep apnea is a serious condition, it is treatable and can be managed with proper medical care.

Sleep apnea diagnosis is an important step in identifying and treating this potentially serious sleep disorder. A variety of tests are used to diagnose sleep apnea, including:

This non-invasive test records many physical activities during the night, such as heart rate, brain waves, eye and leg movements, oxygen levels, and breathing patterns. The PSG also assists in determining the severity of sleep apnea.

Additional tests such as a CT/MRI scan, blood tests, and/or a sleep endoscopy may also be conducted to rule out any obstructive or central anatomic causes of sleep apnea. Once the diagnosis of sleep apnea has been confirmed, the person’s physician and a sleep specialist will develop a treatment plan that is tailored to the patient’s individual needs.

Common symptoms of OSA include:

In severe cases, OSA can lead to heart arrhythmias, high blood pressure, stroke, and other health complications. Diagnosis of OSA is typically made using a:

Treatment of OSA usually involves lifestyle changes, such as sleeping on the side and avoiding alcohol, as well as using a continuous positive airway pressure (CPAP) device as prescribed by a medical professional. Proper diagnosis and treatment of OSA can greatly improve quality of life and prevent long-term health complications.

Going for a Sleep Apnea Test from a Reliable Provider

Going for a sleep apnea test can be an intimidating experience. Before going to the appointment, it is helpful to understand what to expect. The most common type of sleep apnea test is known as a polysomnogram (PSG). This test involves wearing a series of electrodes on the head, chest, and face that monitor brain activity, breathing effort, and airflow.

If sleep apnea is diagnosed, a treatment plan will be developed to help relieve your symptoms and restore sleep quality. Going for a sleep apnea test can be nerve-wracking but is a critical step in managing and controlling this potentially serious condition. The symptoms sleep apnea shows must be dealt with right away. With central sleep apnea treatment at a clinic or through a home sleep apnea device, the events of sleep apnea or episodes will be minimized.

Are There Subtle Signs of Sleep Apnea

Sleep apnea is a sleeping disorder where a person suffers from repeated interruptions of normal breathing patterns. While there may be obvious signs such as loud snoring and pauses in breathing, there are also more subtle signs that one may miss. These subtle signs include:

Additionally, some people may experience excessive daytime sleepiness and difficulty concentrating. If a person experiences any combination of these symptoms, they should consult a doctor to determine if a diagnosis of sleep apnea obstructive is warranted.

Sleep apnea can have a critical impact on one’s lifestyle if it is not properly diagnosed, so if any of these symptoms sound familiar, it is important to speak up and get the help necessary to diagnose and treat the disorder.

Sleep Apnea is a serious condition, and its many symptoms highlight the urgency to diagnose and treat it properly. Common signs include frequent waking, abnormal apnea obstructive sleep patterns, and excessive snoring.

If any of these symptoms are present, it is crucial to consult your physician right away – early detection and treatment can improve overall health and reduce quality-of-life complications.

If you are at a stage where you think a treatment is needed, view a reliable source like nhlbi or any sleep foundation and hospital who are linked to a provider of sleep apnea devices. Take note that you should be taking the right medicine as other patients are. To read more informative facts, visit our main blog on sleep apnea.