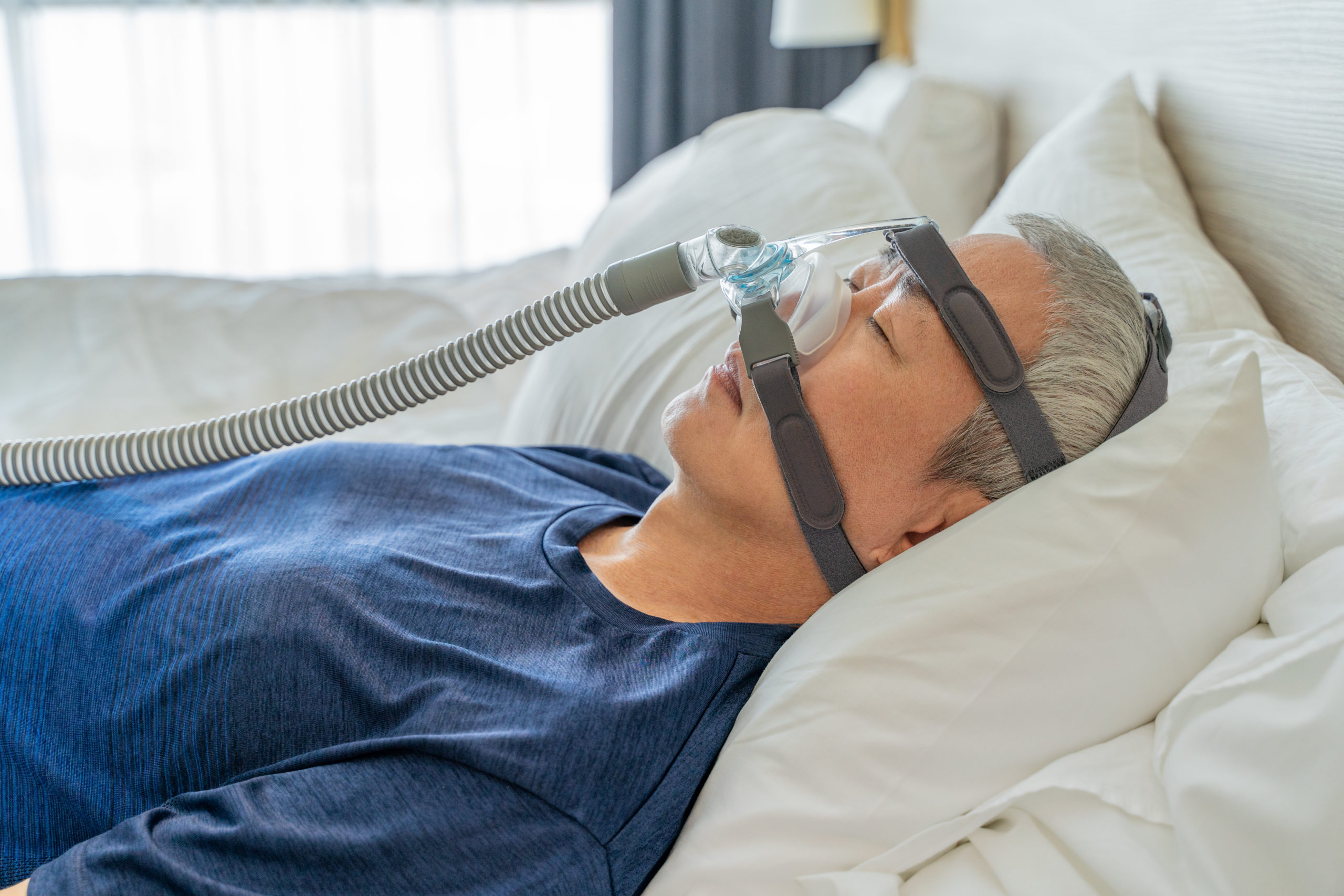 You could be asking the same question, is sleep apnea hereditary? If you have sleep apnea, you’ll know all too well the symptoms and dangers that come with it. Ultimately, sleep apnea can contribute to several serious health conditions if it’s not treated.

These include stroke, hypertension, atherosclerosis, cardiac arrest, and even early death. Sometimes, sleep apnea is a family predisposition. It can run in the genes. However, it can come as a surprise to find out that your family history could have caused your condition.

With that in mind, is sleep apnea hereditary? We powered down our computers and set our alarms to answer that for you.

Let’s get into the facts and figure out whether or not this is true.

Sleep apnea is a condition where a person experience pauses in breathing during sleep. It is a potentially serious condition. But the good news is that it can be treated.

The research is conflicting when it comes to understanding whether sleep apnea is hereditary. Some studies have suggested a genetic link, while others have not. This may suggest that while sleep apnea can run in families, there may be other risk factors as well.

It is important to find out what the unique risk factors are for a particular individual or family, to treat the issue effectively. One possible factor is a family history of cardiovascular disorders since that is a known risk factor for sleep apnea.

Talking to a doctor is the best way to get a full understanding of the individual risks and the most effective treatments based on that information.

Sleep apnea is a potentially dangerous disorder that can leave individuals deprived of oxygen for short periods during sleep. The condition occurs when a person’s breathing is obstructed. It causes them to suddenly stop breathing and can occur several times throughout the night.

It is characterized by loud snoring. This of which happens when the body is gasping for air. Sleep apnea can increase the risk of conditions such as:

It can also cause daytime drowsiness, resulting in an inability to focus, and an increased risk of motor vehicle, and work-related accidents. It can affect not only an individual’s physical health but also their emotional and mental health.

Therefore, it is important to pay attention to any potential warning signs and seek medical attention. Treatment options such as lifestyle changes, medications, and even surgery may have to be considered to control the symptoms associated with sleep apnea and reduce the risk of any additional health complications.

Can Central Sleep Apnea Be Influenced By Genetic Causes?

Genetic causes may play a role in the presence of central sleep apnea (CSA). CSA is a condition in which the brain temporarily stops sending signals to the muscles that control breathing, resulting in pauses in breathing during sleep. There are several known genetic variants associated with CSA, most notably those affecting the SCN10A gene.

This gene is linked to both CSA and circadian rhythm-related disorders. Other genetic defects can also be linked to breathing problems of various kinds. These can be suggesting CSA might be affected in similar ways. Some research suggests that variations within the IRF4 gene may make individuals more prone to CSA.

CSA may have a genetic component, though the exact nature of any such influence remains to be seen. Understanding the genetic influence on CSA could lead to better treatments and more effective prevention of the disease.

What is Obstructive Sleep Disorder?

Obstructive sleep disorder (OSA) is a sleep disorder characterized by pauses in breathing during sleep. It results from obstruction of the airway due to worsening of the throat muscles, tongue, and other tissues surrounding the airway.

As a result, the brain has difficulty sending signals to the throat muscles to keep the airway open. This leads to pauses in breathing known as apneas. Common symptoms of this disorder include:

Individuals with OSA may also experience headaches or morning sore throat. The main treatment for this disorder is the use of continuous positive airway pressure (CPAP) devices. Surgery and lifestyle changes such as losing weight, quitting smoking and avoiding alcohol can also be beneficial. If left untreated, OSA can lead to complications such as heart disease, high blood pressure, and stroke.

Obstructive Sleep Apnea (OSA) is a sleep disorder that is increasingly being recognized for its genetic influences. Studies suggest that a person’s risk of developing OSA increases with a family history of the disorder.

Some studies have identified gene variants that may increase the risk of OSA, such as those that affect the size of the upper airway muscles. Other studies have found an association between childhood obesity and OSA. This of which suggests that genetic factors may influence the development of the sleep disorder.

OSA can also be linked to other disorders with a genetic component, such as:

The evidence that OSA has a genetic influence is growing, suggesting that future treatments and prevention strategies may be more successful with a better understanding of the genetics of the disorder.

Sleep apnea is a common disorder that can hurt the quality of life. The good news is that yes, it is curable. Treatments for sleep apnea include lifestyle changes, such as sleeping on one’s side to promote better airflow, using a CPAP machine, or undergoing surgical procedures.

Making changes to one’s lifestyle can also help in the reduction of sleep apnea symptoms. These changes include losing weight, eliminating smoking and alcohol, avoiding heavy meals before bed, and exercising regularly. A combination of these measures can help to improve the quality and duration of sleep.

Surgery can also be used to create more space for air to move in and out of the nose, throat and upper airways, leading to fewer episodes of sleep apnea. In short, while it may take some effort, sleep apnea is indeed curable.

Sleep apnea is a potentially serious disorder that can cause fatal consequences if not treated. It is a condition in which breathing is interrupted during sleep due to obstruction of the airway. The pauses in breathing can cause low blood oxygen levels. This of which can lead to several serious health risks such as stroke, heart attack, and even death.

If left untreated, sleep apnea can lead to birth defects, sudden infant death syndrome, depression, and other serious complications. The good news is that sleep apnea can be effectively managed when diagnosed and treated with continuous positive airway pressure (CPAP), lifestyle changes, and/or surgery.

Although sleep apnea is not directly fatal, untreated sleep apnea can lead to fatal outcomes. This is why it is important to get help if you think you have sleep apnea.

Sleep apnea is a disorder that disrupts normal breathing patterns at night. It often leads to loud snoring and coughing. Those suffering from sleep apnea may experience:

Other signs of this disorder may include frequent urination at night, changes in mood or behavior, difficulty concentrating and feeling overly tired even after a full night’s sleep. Additionally, those suffering from sleep apnea often experience:

If you are experiencing any of these symptoms, it is important to make an appointment with a sleep specialist who can diagnose and properly treat your disorder.

Sleep apnea can occur when the muscles that control your breathing become weakened due to various factors. Here are some reasons:

A primary cause of sleep apnea is obesity. Individuals who are overweight or obese are more likely to have excess tissue in the airway, resulting in an obstruction of airflow.

Neck circumference is another factor that can cause sleep apnea, as a thicker neck can reduce the size of the airway. Other causes include smoking, alcohol consumption, medications, and certain medical conditions.

Sleep apnea has been linked to a wide array of anatomical issues, including:

Narrowing of the airway can be caused by obesity, overgrowth of the adenoids, or a deviated septum. Neurological conditions like stroke, brain tumors, and cerebral palsy can also lead to sleep apnea.

Age Is a Factor

Age is a major factor for many people that develop sleep apnea. As people age, several physiological changes can cause an individual to suffer from sleep apnea. Age is also linked to enlarged tonsils, enlarged tongue, and enlarged adenoids. These of which can restrict the airways and prevent full inhalation during sleep.

It is very important to see your doctor if you believe you are suffering from sleep apnea.

When Does Sleep Apnea Start?

Sleep apnea begins when the airway collapses or becomes blocked during sleep. It can start at any age. Although, it is more common in middle-aged and elderly people. It can also be genetic and some babies may be born with narrow airways making them more susceptible to sleep apnea.

The condition is most common in overweight people who are typically inactive and have poor diet habits. sleep apnea can also be caused by smoking, alcohol abuse, and sleep positions, like sleeping on your back.

Why Go for a Sleep Apnea Test?

Sleep apnea is a serious condition that can lead to numerous health risks if left untreated. Going for a sleep apnea test is important for anyone who suspects that they have the condition. This specialized test will help identify any blockages and the most suitable treatments for the individual.

Sleep apnea can have dangerous long-term effects, such as an increased risk of stroke and heart attack. Thus, it is essential to have a proper diagnosis and treatment. A doctor is best placed to diagnose and prescribe appropriate treatments, such as:

It is essential to receive treatment to prevent any serious complications, as well as to ensure a more restful sleep. Going for a sleep apnea test can make all the difference in a person’s quality of life, and help them to live more healthily and happily.

Ways to Avoid Sleep Apnea Regardless of the Cause

There are many ways to avoid sleep apnea, regardless of the cause. Here are some ways:

1.) Avoid the use of alcohol, sleeping pills, and sedatives as these can worsen sleep apnea.

2.) Maintain a healthy weight as excess body fat can create pressure on your airways and worsen sleep apnea symptoms.

3.) Quit smoking if you are a smoker, as smoking damages the airways and can worsen sleep apnea.

5.) Use a humidifier in the bedroom to keep the airways moist, which can reduce snoring while improving your overall breathing quality.

By following these tips, you can reduce your risk of developing sleep apnea and improve your overall sleep quality.

So, Is Sleep Apnea Hereditary?

In conclusion, while certain risk factors may increase one’s likelihood of developing sleep apnea, the condition is not necessarily hereditary. Therefore, it is important for individuals with risk factors to be aware of their symptoms and to reach out for help if needed.

If you think you or someone you know may be struggling with sleep apnea, contact a healthcare provider for additional guidance.

If you want to read more informative articles, explore our main blog section.